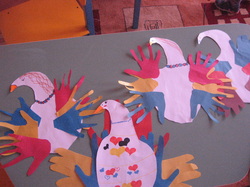 -Kindergarten: Continued mastery of the verbs ‘to have’ and ‘to live.’
-Pre-K:  an introduction to the verb ‘to live,’mastery is not expected but hoped that a  student might be able to express  ‘I live in Kazan’ or ‘Cows live in a
farm.’
-Kindergarten: mastery of farm oriented vocabulary.
-Pre-K: increased phonetic awareness through the letter of the week (and the Russian equivalent when applicable)

-Kindergarten: the understanding of pets vs. other animals---and an understanding that sometimes animals can be domesticated and live amongst us without being pets.
-Exposure to English language folk songs ---music as a shared cultural construct.

I.)  Core Activity:
Pre-K: due to excessive  absences today will be treated as a review day.

Kindergarten: Today students will be introduced to the week’s farm animal vocabulary. It is important also that students do not forget what has been previously accomplished so we will watch “Yertle the Turtle” again. It will be interesting to observe if students pick up on the overarching themes of jealously and greed.

I.)   Core  Activity:
Pre-K: introduction to farm oriented vocabulary, what connections can be made between these animals
and those we learned about last week?

Kindergarten:  Students will begin learning the popular English language song “Old MacDonald had a Farm.” What is important in learning
this song is not memorizing it but figuring out through the song where the learned vocabulary is. This song provides a natural introduction to vocabulary.  All students will be  given two or three cards during the song and asked to indicate their animal when they hear it mentioned by saying ‘I have a ________.’

I.)  Core Activity:
Pre-K: like their colleagues will be creating a handprint goose/chicken/hen today. The main goal of this activity for this particular cohort is to engage in creativity and deliberate  choice making skills. Students will not be asked to decorate their creation in any particular way or asked to use certain colours for the handprints. Also engages fine motor skills.

Kindergarten: same activity,students in this cohort will, however, do their own tracing and cutting---independent choice making.

I.)       Core Activity:
Pre-K: flowing from the enthusiasm for the goose handprint
activity, this cohort will do a second modified version of this using paint---the emphasis is calling on ‘colours’ retention.

Kindergarten: today we will recall our interest and study of shapes. Following a Frobelian approach each student will be given a set of  various shapes: squares, rectangles, circles, arches etc and asked to create a ‘work of beauty.’ Or a representation of anything that is pleasing to them whether that be a flower, a house or an intricate geometric  art.

I.)   Core Activity:
Kindergarten: students will complete their weekly “Friday Review.”
Pre-K: students in this cohort will also a do a review, albeit  their review will not be written rather conducted during circle time.