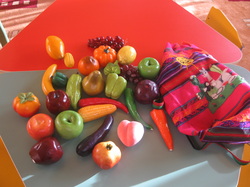 This week we will be beginning a unit of work on healthy foods, the focus for the first week is on fruits and vegetables. As a baseline it is hoped students will recognise these familiar foods and be able to share with others what they are in English.

c.) Behavioural:
-Pre-K: increased interest and ability to sit through circle time
-Kindergarten: respect for class rules and safety (requires the aid of the Russian teacher)


The letter of the week is B/Ba as in Banana!


Monday January 23, 2012
I.) Core Activity: Fruit or Vegetable?
-Teacher directed: directly after circle time fruits and vegetables are introduced using their toy counterparts.
-Pre-K: a fruit or vegetable will be introduced individually each  and subsquent activity will centre on that.
-Kindergarten: a full distinction will be attempted between fruits and vegetables and their names will be attempted today and continued on this week.

Tuesday 24 January, 2012
I.) Core activity:
-Kindergarten will begin cutting out and colouring the various fruits and vegetables for their healthy food basket. This activity is meant to encourage the ability to catagorise things as well as practice the fine motor skill of close cutting.
-Pre-K: Colour me an Apple: this cohort will attempt to make the phonic connection between last week's letter 'A' and the word 'Apple.'

Wednesday 25 January 2012
I.) Core Activity:
-Kindergarten will select the fruits and vegetables and create their baskets.
-Pre K: Colour me a Banana: this cohort will make the phonic connection between the letter of this week 'B' and the word 'Banana.' Corresponding colouring worksheet.

Thursday 26 January, 2012
I.) Core Activity:
-Kindergarten: today we are going to work to verbalise all that we have been learning about this week. Students will be introduced to: "I like..." and "I don't like..." praises and asked to use them with randomized fruit and vegetables. This will also include a tracing worksheet so students have the opportunity to see and practice what these sentences look like in English.
-Pre K: mould me an Apple or Banana using modeling clay this cohort will create an apple or banana, this activity is meant to encourage memorization for meaning and fine motor skills, as well as invidual creativity.