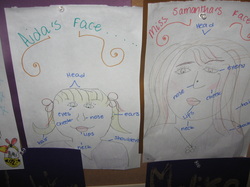 Kindergarten-introduction of upper body part (shoulders upwards) vocabulary via flashcards and our song of the week “Hands, Shoulders, Knees and Toes.”

Pre-K-introduction of vocabulary via the song ‘Hands, Shoulders, Knees and Toes”.” Some overall review during circle time.

Kindergarten-introduction of the inquiry phrase “What colour/share you’re your _____(eyes, ears…?”) This draws on previously taught knowledge and encourages students to generalize their learning outside of the verbal comfort zone.

Pre-K –students will also do this on a much less advanced scale, focus rather on learning and enjoying our new song.

Kindergarten-today students will draw and colour their own self portrait and will conclude with verbal identification of each part on the face. Those students with advanced handwriting skills will be encouraged to copy from Miss. Samantha’s demo picture.

Pre-K- students in this cohort will also complete a self portrait. However, the emphasis here because most of them do not have the attention span or fine motor skills to draw their emphasis  will be on final verbal identification of facial parts on their picture and choice making skills as they will attempt to colour their portrait.