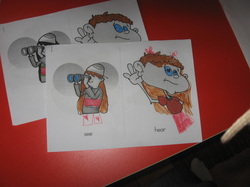 Kindergarten-students will be introduced to the ‘lower half’ flashcards. Vocabulary includes: legs, feet, hips and back.

Pre-K-students will attempt to colour their previously constructed build a face.

Kindergarten-introduction of the concept of left vs. right, if this is relatively successful we will also try an English language version of the game “Simon says” which apart from building listening skills will also reinforce the ability/willingness to follow instructions that this group. If this game is successful they will be encouraged to try it amongst themselves.

Kindergarten- Introduction of this week’s song ‘Hokey Pokey” vocabulary will include upper and lower half body parts. We may also start our special foot oriented project “follow my own footsteps.”

Pr K - will start “follow my own  footsteps.” A special project that will target: fine motor skills (tracing,) counting, identification/generalization and choice making skills. This project involves a student tracing their own foot (with minimal assistance when possible) and decorating it with a choice of materials---no boundaries placed on their creativity.

Kindergarten- combined class with music teacher, students will practice their two songs from over the last fortnight.

Kindergarten-if they have not started already, will complete the “Follow my own Footsteps”

Pre-K: special extended story and dance time. Today students will review but a much greater portion of time will be allotted for traditional story time during our standard circle time. This day is meant to “test” children’s attention span and spatial requirements for conducting this regularly in class *next year.*