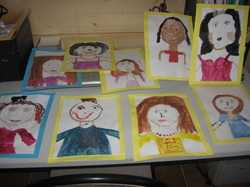 -Kindergarten: an understanding of the verb “to live.” Ability to state: “ ___(noun) live (s) in____(place.) Our focus this week will be on the simple present tense but if students demonstrate their ability to learn this quickly we will move forward with teaching other verb tenses in conjunction with the simple present in following weeks.

-Pre-K: meaningful recall of animal names learned this week. A much simpler goal has been set for this cohort to also by the end of the week express that they live in Kazan and/or Russia.

-Kindergarten: Extending on the idea/concept of the family unit students will be encouraged to also start to see the difference as some animals as ‘pets’ or those that live within the domestic unit and animals as ‘wild.’ There is, naturally, a third category in which animals an animal could be a pet or live in nature e.g turtles---this too will be explored.

-Kindergarten: will also be working on learning the shapes for meaning, this activity will have an actual in classroom application with the cross-curricular “Geometric pet” activity scheduled for Friday.

-Pre-K: our class goal is to learn a new animal/pet name each day in such a way that it can be recalled at random. Where opportunity presents itself, we will also use the pet names to strengthen previously learned letters/phonic blends.

-All students: this week we will attempt in the very natural way to encourage more sharing amongst students. How will we do this? Through combining colouring markers/coloured pencils from their individual packages in such a way that children must take and share with each other at will.

Our letter of the week is 'G/Ga' as in Grandfather!

Kindergarten: students introduced to the pet vocabulary we will be learning and using this week. Words include: cat, dog, turtle, snake, hamster, fish, iguana,  guinea pig. As today is our first class period after an extensive break, workload is modified.

-Kindergarten: review of our class story “The Rainbow Fish” by Marcus Pfister. Today’s core concepts include:  a.) review of previously learned colours, b.)  fish as creatures that can either live in the ocean as a wild animal or as a pet and in aquarium.

-Pre-K: Creation of a modified a rainbow fish art project. Unlike with the older cohort who have the ability and desire to multitask, the focus for this group is to practice fine motor skills, individual decision making, creativity and colour recall while introducing the concept of pets in a very natural way.

-Kindergarten: Where do Turtles live? Continuing our theme on pets and animals that come from the sea today the students will learn about this unique (and slow!) animal. If time permits we will watch and read the famous story “Yetle the Turtle” by Dr. Suess.

-Pre-K: This cohort will follow the same circle time pattern but will diverge in the direct focus on painting their own individual Box turtle.

-Kindergarten:  Ssssssnakes! A natural progression from  fish and turles is to that of another potential pet, and wild animal, Snakes! Students in this cohort will create a 3D snake and watch video clips about wild and domestic snakes…time permitting!

-Kindergarten: today we will do the Friday Review early because tomorrow we will do a special cross curricular activity: “Geometric Pets.”

-If time permits we will also watch the classic American children’s story: “Yertle the Turtle” by Dr. Suess.

-Kindergarten: today we have an extra interesting and special activity which will engage different parts of what students have been taught: shapes and animals. This activity is extra special in its deliberate cross-curricular focus and call for students to be creative and independent thinkers.

-Pre-K: Students in the younger cohort will not miss out on the cross-curricular fun, however, more time will be taken during our daily “Circle Time” to review  the shapes in English and Russian before moving on to the activity. As a safety precaution shapes will be precut for this group of learners.